Non-surgical treatment, let me live like a normal person!*
<Previous Thanks Once More*
Next> A Thank-you Note from a Rectum Cancer Patient--The most Beautiful Chinese Dream*

Umar Latinulu, 51-year old, from Jakarta, Indonesia, looks robust, optimistic, so that we really could not imagine he is the rectal cancer patient that we would interview today. The translator along with us told that when Umar Latinulu knew the interview, he was really excited and put his ward tide early. Umar Latinulu enthusiastically greeted us, which made everyone suddenly closer. During the interview, Umar Latinulu shared his anti-cancer experience. On recalling all these things, he was still filled with various emotions. 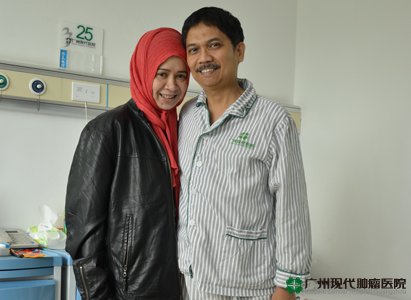 "When the doctor told me that it was rectal cancer, I was very shocked, but what made me more upset was that stoma surgery was the only one solution told by doctor."

Early in the year 2011, Umar Latinulu began to suffer from intermittent bleeding in the stool, and stool becoming thinning, he believed it was common anorectal disease, so he brought some traditional Chinese medicine for self-medication, after that, his symptoms have recovered, so he did not attach importance to this. It was not until in September when he went to the hospital to visit a friend, an advertisement of this hospital caught his attention: “cancer requires earlier detection and treatment, the earlier the better.“ On thought of the symptoms he had suffered, he decided to go to hospital for definite detection!

Under the company of his wife, Umar Latinulu went to local hospital to conduct a series of inspections, but the result was really astonishing--rectal cancer. After knowing this, his wife became very sad in the next period of time, he also thought his symptoms like hematochezia, constipation, stool thining became more and more obvious, what feared him more was the rectal cancer made him really threatened and suffer from severe weight loss.

Cancer is very scary, and its good therapeutic effect can only be obtained through early treatment! On realizing this, Umar Latinulu went to local tumor hospital once and got to know treatments for rectal cancer from some tumor hospitals in Singapore, but doctors’ answers disappointed him again and again, as all the doctors said: stoma surgery is the only one solution and you must live together with a bag forever. This really made him frustrated. 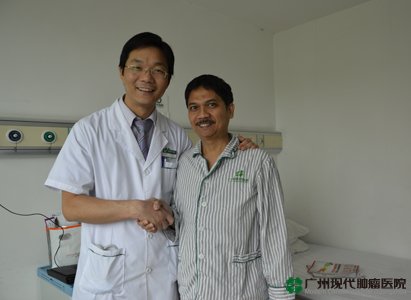 Althrough Umar Latinulu has refused surgical resection, he did not give up treatment. He inquired about cancer treatment and cancer hospitals from his friends around. Finally the hard work paid off, he discovered that Modern Cancer Hospital Guangzhou in newspaper has non-surgical solutions for him, which seemed like the light in the dark dawn, gave him hope and the courage. Umar Latinulu decided to embark on this trip for some exotic medical treatment under the advice and support of his family and close friends.

On October 2, 2011, Umar Latinulu came to Modern Cancer Hospital Guangzhou for the first time, after admission, he had a comprehensive inspection, and then doctors developed the comprehensive treatment program based on his conditions, which combined concurrent chemoradiotherapy with interventional therapy and natural therapy. His doctor said: interventional therapy and immune treatment can not only directly kill cancer cells, but also increase the body's immunity, and after treatment, patient’s conditions would be improved obviously, and the effect is as direct as surgery. The fact is just like what the doctor has told, Umar Latinulu recovers quickly and he feels very relaxed: defecation becomes normal and even his weight also is slowly regaining to the same as before.

After a year of treatment and conditioning, he looks as healthy as other ordinary people. "Now your disease has recovered by almost 95%, and CT has not seen any foci in rectal surface," Umar Latinulu recalls what the doctor has told that day and still seems so excited.

When talking about medical staff here, he is very happy and talks fluently and endlessly about his personal experience: "I feel very relaxed as the nurses always smiles, which is a beautiful landscape in the hospital; doctors of this hospital are really skillful and impress me so much; what’s more, patients friends here are so lovely and kind that I feel all are like family." 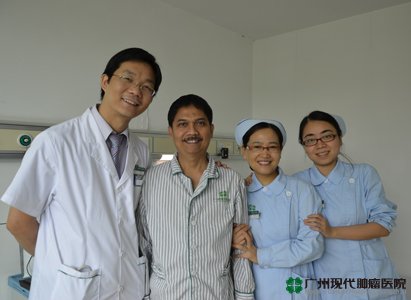 “Thank God gave my chances of recovery, thanks to Modern Cancer Hospital Guangzhou made me healthier after discharge; I must live a better life to better repay the society!”told by Umar Latinulu and he also said that it has become the biggest wish, if there is someone suffering from the same disease, hope they should not be too sad and do not give up, instead, they must actively search the most suitable treatment and hospital, and cooperate with doctor’s treatment, so as to faster recovery.

Rainbow always comes after storm. Before leave, Umar Latinulu quietly tell us a small secret that he has not only got treated but also opened another window for his career, and now his career is more flourishing.