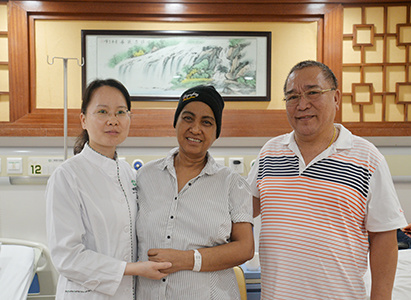 NANITA CUIZON from the Philippines is a housewife and she takes care of her husband and children every day. In the latter months of 2015, she felt abdominal pain and she experienced vomiting which she thought was just a small problem. However, the diagnosis result shocked her and her family.

She was diagnosed with liver cancer stage 3. The doctor told her that she only has 6 months to live. She underwent CT scan and MRI at St Luke’s Hospital and was suggested to undergo operation to remove the tumor but she refused because of the high risk of open surgery. What made her more hesitant was that a friend of her husband who was diagnosed with colon cancer underwent surgery, chemotherapy and radiotherapy however he still wasn’t able to make it.

Since she refused to undergo open surgery, her family tried to find other cancer options for her. Coincidentally, her husband learned about Modern Cancer Hospital Guangzhou through the Internet which offers 18 minimally invasive technologies for cancers, different from the traditional surgery, chemotherapy and radiotherapy. Since NANITA improved on the first course of treatment, she and her husband came back to Modern Cancer Hospital Guangzhou on March 2nd for the second course of treatment. At this time, NANITA felt at ease and relaxed about the treatment. She took one session of interventional therapy and microwave ablation. Before discharge, her attending doctor brought them good news that 60% of tumor tissue was destroyed. They never thought that the treatment would deliver that significant effect after two courses in one month’s time. NANITA also encourages other cancer patients, “Be brave and trust the doctor and the advice they give. Now I am in good condition. I hope you can also make it through like me.”

NANITA‘s story proves that minimally invasive treatment can effectively help alleviate the symptoms and shrink the tumor so that survival time can be prolonged and cancer patients can return to their normal lives.