Currently, the complication rate of radiofrequency ablation for the treatment of pancreatic cancers is about 28％-40％, and the mortality is 7.5%. Now, the three problems of pancreatic cancer physical ablation therapy are uncomprehensive ablation, blood vessel damaged and intestine wall and pancreatic duct injured, which can be greatly solved by nanoknife with the advantages of killing cancer cells by damage cancer cell construction by electrical current, without any injure on important organizations such as blood vessels, intestinal canal and nerve. Referring to the study from American Surgical Association, most of the pancreatic cancer patients can have double survival rate. 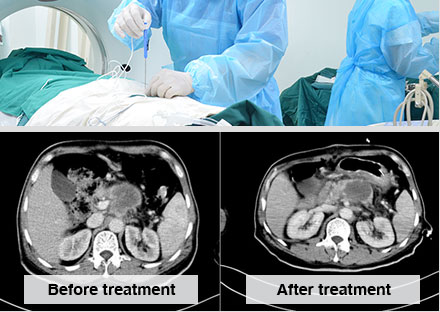 How does Nanoknife work?

Nanoknife is suit to treat what kind of tumors?

Each pair of probe releases 90 times of ultra-short pulse and each group of ablation takes less than 1 minute.Even if the solid tumor reaches 3cm in diameter, the whole ablation duration would be less than 5 minutes.

Guided by CT or MRI and other imaging devices, doctor can have a real-time monitoring on probe position, ablation process of target area and final size of the ablation zone, observing changes in the surrounding tissue ablation zone, ensuring effect and security which contribute to a rapid postoperative recovery.

Regardless of location, size and form of the tumor, complete ablation can be got through Nanoknife. After ablation, there is clear boundary between the ablated and unabated areas, which means no residual lesion and therefore lower the risk of recurrence.

After Nanoknife treatment, vessel, bile duct, nerves, ureters and other structures within ablation zone can be preserved without any irreversible damage. For Nanoknife in hepatic zone, important hepatic tissues such as hepatic artery, hepatic vein, portal, intrahepatic bile duct can be well protected after the treatment.

Nanoknife technology has an induction effect on death of cancer cells, and then phagocytes of human body will eliminate the dead tissues, promoting regeneration and repair of normal tissues.

Conventional ablation is forbidden for tumors located near large blood vessels, bile duct, pancreatic duct, hepatic portal vein, etc. However, Nanoknife has none such contraindication, which avoids injure on pipeline and nerves.

Nanoknife for pancreatic cancer was performed successfully in Modern Cancer Hospital Guangzhou. Li Xingde (alias), from Indonesia, was diagnosed with pancreatic cancer stage 3, tumor size of 4.5 × 4cm. Due to rather special anatomical position of the pancreas, pancreatic surgery is of high risk and no radical resection. Moreover, chemotherapy and radiation has limited treatment effect on pancreatic cancer. In this case, advantages of Nanoknife perfectly make up the short boards of pancreatic cancer treatment. Nanoknife is to destroy cancer cell membrane structure by using of electric current, leading to cell death, without damaging surrounding tissues such as blood vessels, bowel, and nerves. After a joint consultation over his case, MDT of MCHG decides to adopt the most advanced Nanoknife for him. 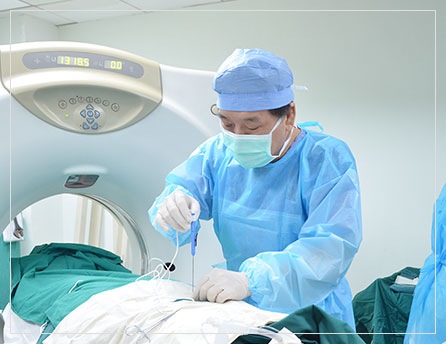 Disclaimer: Operation is effective to early solid tumors, but it’s not suitable for most middle or advanced tumors. Patient with middle or advanced tumor is relatively weak, but the combination of minimally invasive therapy and chemotherapy or radiotherapy can effectively reduce the harm and side effects brought by the treatment and help patient get better efficacy.