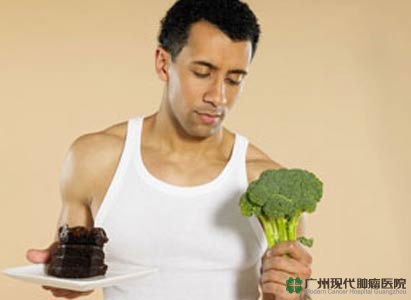 A French study showed that the chance of obese men are twice higher risky in suffering from prostate cancer than the slims. Researchers took 194 prostate cancer patients as investigated objects, and the result shows that 70% of the respondents are overweight. Researchers believe that the reason why obesity can be one of the causes of prostate cancer is hormone imbalance. Therefore, weight loss has become an important means in preventing prostate cancer.

Researchers from Modern Cancer Hospital Guangzhou found that vitamin E can produce prostate -specific antigen and androgen receptor, which plays a role in interfering the growth of prostate cancer cells. Experiments show that when prostate cancer cells are put in vitamin E, the number will be reduced by 25 % -50 %; and males who take vitamin E regularly are 1/ 3 less risky in suffering from prostate cancer than those not. Consequently, experts suggest that taking vitamin E under the guidance of a doctor can help to prevent prostate cancer to some extent.

Researchers also found that the incidence of prostate cancer is related to human DNA molecule damage, which is caused by free radicals oxidation. Whereas, tomatoes are rich in lycopene, can neutralize free radical oxidation. Therefore, experts recommend that men should at least eat 200 grams of tomatoes (or drinking 200 ml of tomato juice per day) to prevent the occurrence of prostate cancer.

To increase the intake of boron

Boron is an element widely present in fruits and nuts. A U.S. study showed that men intake sufficient amount of boron dietary can reduce the risk of prostate cancer. Researchers have a comparison between 76 prostate cancer patients and 70 healthy men in their eating habits and the result of which found that almost all the healthy men have the habit of eating fruits regularly, while the sick ones rarely or never take any fruits. For the sake of preventing prostate cancer as much as possible, experts suggest men to eat more fruits that are rich in Boron, such as apricots, grapes, avocados, etc.