Be careful with three signs of stomach cancer

For gastric ulcer patients aged 40 and above, it might be a sign of stomach cancer having symptoms like loss of appetite, nausea, innutrition, tiredness, vomit overnight or dark red foods, dislike meat and obviously become thin, which are not seen improved with medicine treatment. 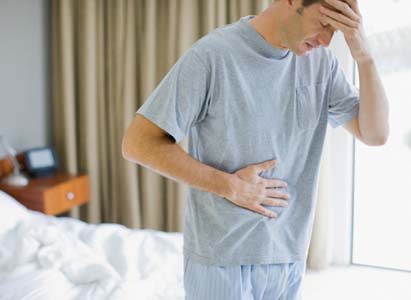 The main characteristic of gastric ulcer is regular pain, which appears after being full. It usually occurs half an hour or two hours after meals and disappears before next meal. Pain caused by duodenal ulcer usually happens in hunger or on an empty stomach, often 3-4 hours after meals, and continues until next meal. After eating, the pain will be relieved or disappear completely. Some patients may also feel pain at night.

If the ulcer originates in the stomachus pyloricus near the duodenum, the pain is the same with that caused by duodenal ulcer. Once the pain feels different or becomes continuous or is lightened, you should look out for cancerous changes and go to hospital for examination timely.

Part of gastric ulcer patients can touch a mass at the pit of their stomach, which feels hard with rough surface, enlarges rapidly and feels painful when pressed. With the enlargement of the mass, vomiting will become severer, which means cancerous change has probably happened.

Usually, black stools are very common after taking in blood of animals like pig, sheep and chicken. They can also be caused by some medicines. However, once ulcer patients have unexplainable black stools or continuously have blood in stools, attention should be paid and further examination is required, for these symptoms are probably the first signs of cancerous change.

Cancer experts from Modern Cancer Hospital Guangzhou remind that we should pay attention to our own physical conditions and look out for the unnoticeable attack of stomach cancer. Once above symptoms occur and do not disappear after taking medicine, they might be warning of cancerous change from your body.