As all believe that, take more vegetables and fruits can help to fight cancer and build up a strong body. Then what kind of fruits can fight cancer? The specialists from Modern Cancer Hospital Guangzhou will introduce you the anti-cancer properties in vegetables. 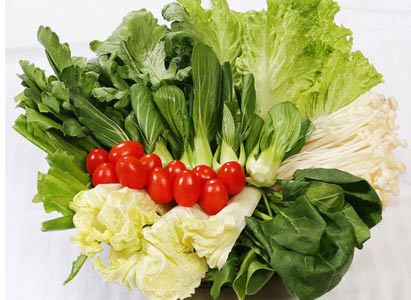 One of the important anti-cancer property in vegetables: interferon inducers

Interferon inducers can induce and stimulate cells to produce interferon to promote body resistance to virus and inhibit the growth of cancer cells. It widely exists in the vegetables of cucurbitaceae like towel gourd, serpent gourd and calabash courd, the rhaphanus like garden radish, white and green turnips, and the umbelliferae like carrot. Interferon works importantly in prevention from the cancers of mouth, esophagus, stomach and nose.

According to the scientists from a cancer study institute, β-sitosterol, a main component in vegetable, can prevent tumor from formation. When the tested animals took the food with 0.2% β-sitosterol, the growth of colonic epithelial cells decreases 50% then referenced animals. There are also other tests reported that, among the animals took the cancer-causing agents like nitrosamines first, then fed with β-sitosterol, only 1/3 of them developed tumor, when over 1/2 animals in referenced group developed cancer.

The other important anti-cancer properties: amylase and lycopene

Japanese scientists found that in researches, a kind of amylase in carrot can strongly dissolve the cancer-causing agents like nitrosamine and benzoapyrene to prevent cancer effectively. There is also another kind of amylase in lettuce, pea, bean sprouts and pumpkin also disintegrating nitrosamine. Apart from the scientific researches in USA proved that the males who take more tomatoes can cut down the chance to develop prostate and pancreas cancer. Investigations also show that, the men who have tomatoes weekly compared to the non-taken ones, their percentage to have prostate cancer decreases 45%. That is because lycopene in tomatoes can interfere with the risk factors from damaging DNA to cause cancer in human body.