This saying of “cancer can be prevented" is common among global doctors. A number of research institutions also published a variety of new researches to substantiate it. Recently, The Times of India has summaries some simple methods to help people to fight cancer and make cancer farther away from us. 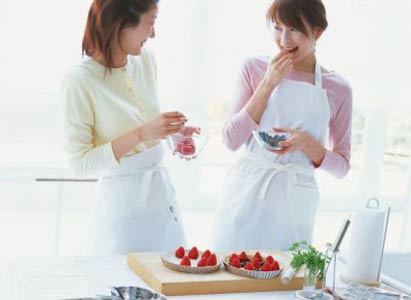 1. Doing chores at home to reduce the risk of breast cancer

Epidemiologist Professor Tim • Zee of Oxford University and his colleagues have found that, six hours of doing chores a day, brisk walking or gardening vegetables can reduce breast cancer risk by 13% for women. 2.5 hours of activity per day can reduce the risk of breast cancer by 8%. But it is worth reminding that a previous study held by U.S. Environmental Protection Agency has found a solvent called perchlorethylene used in traditional dry cleaning process may lead to liver cancer, kidney cancer and leukemia, therefore, it is recommended to use less dry cleaning during doing housework, instead, use mild liquid detergent to wash items by hand.

The latest study of Sweden Lund University found that if men over the age of 45 drink less or don’t drink alcohol, the risk of esophageal cancer can be reduced by 5% for them; if further eat more fruits and

British scientists found that regular consumption of processed meat, such as bacon, sausage, will greatly increase the risk of intestinal cancer risk, especially for men. Dr Rachel • Thompson who is in charge of World Cancer Research Foundation said: “The weekly intake of processed meat should be controlled in less than 70g (equivalent to the weight of three pieces of bacons). If you just want to eat barbecue, it is preferable to marinate the meat or other foods one hour with lemon juice before being baked.

Cancer’s favorite “food” is sugar. A study in Japan showed that when the blood flows through the tumor, about 57% of the blood glucose will be consumed as nutrients supply by the tumor. American Clinical Nutrition Journal has also reported that drinking two cups of sweet drinks every day would face 90% higher risk of pancreatic cancer than who do not.

5. Use cell phone as less as possible

International Cancer Research Agency subsided by World Health Organization announced that after sorting out the scientific documents or data related to mobile phone use and brain tumor, they classified radio frequency electromagnetic fields used by mobile phone as “probable carcinogen“. The mobile phone users are encouraged to use the headset as much as possible to avoid phone close to the head for a long time.

Medical physicists David • Brenner of Columbia University has published papers in the New England Medicine Journal, and the papers have demonstrated that up to 2% of cancer cases in the United States may be caused due to the radiation of the CT scan. Long-term radiation accumulation will bring greater health hazard.

Researchers of Rutgers University found that adding pericarp of cedrate fruits when making tea, the possibility for drinkers suffering from cutaneous squamous cell skin cancer will be reduced by about 70%. Citric acid contained in lemon has a role of preventing and eliminating skin pigmentation. It needs to be noted that tea shall be remained hot as cold tea is weaker in anti skin cancer than that of hot tea.

8.Adding a little garlic to your foods if suitable

Professor Earl Harrison of Cancer Center of Ohio University said: “through urinalysis, we discovered that more garlic intake, less potential carcinogen content in human body." However, high temperature will destroy the most important anti-cancer substance of garlic- alliin, therefore, it is suggested to crush garlic first and then place these garlic spread for 15 minutes before cooking.

Is Surgical Resection A Preferred Choice for Nasopharyngeal Cancer?
30, 4, 7, 1-Digital Anti-cancer
Five Tips to Help You Stay Away from Cancer
Male Should Mind Breast Cancer Too
Sexual life is possible to prevent ovarian cancer
The human immune system is the best “anti-cancer drug＂