1. Breast cancer patients in early stage are not able to be detected as obvious lumps, but often accompanied with local discomforts. This situation happens very often especially in women after menopause.

2. Early stage breast cancer patients can reach bean-size masses in their breast grand, which are hard and movable but with no sharp pain, while a few patients might bear intermittent pain or pricking pain.

3. Change of the breast shape. Visible skin bulge can be seen in the mass region, local orange peel -like skin, edema, and even discoloration may appear in some cases. 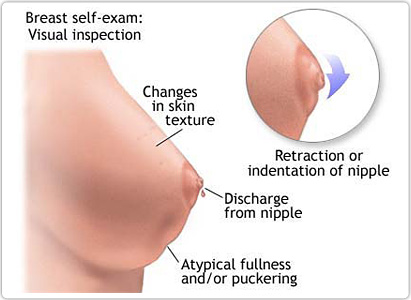 It is a good idea for all women to do breast checkup at least once a year. You can get this done by your doctor or touch it yourself. Make sure that you know exactly what you are looking for. Early symptoms of breast cancer may go unnoticed but when examining the area they are relatively easy to Early. The lump should be noticeable and prominent from the surface of the skin. If there is any change in the texture and appearance of your breast skin or nipples then this should also be easy to notice. If you keep examining your breasts on a regular basis then it will be easier to identify when there has been any change to it.

Symptoms of Breast Cancer in Women

Symptoms of breast cancer in women vary slightly . If you are a woman you may expect to experience breast lump and changes of the skin and nipples in your breast area. There may be other symptoms that could be experienced aside from this as well though. You can look for a full list of breast cancer symptoms but this has covered the majority of the common symptoms that are likely to be noticed by female patients with this type of cancer.

Symptoms of Breast Cancer in Men

The symptoms of breast cancer are mostly to do with the breast skin and nipples. If the cancer spreads then symptoms may be noticed throughout the body as well. When the cancer is in its early stages the symptoms are typically restricted to the breast area though.Even though these symptoms may not be able to find at the first sight, they are still relatively easy to be detected if you examine the area. Ultimately, there are numerous symptoms of breast cancer and it is important if you can get timely examinations and effective treatments. So, visit a doctor timely when any abnormal symptom is found.