Ovarian cancer grows fast and is easy to spread. Usually it has no obvious early symptom and is often discovered accidentally in gynecological examinations or when it become palpable in the abdomen after growing to certain size and reaches out of the pelvic cavity, or when complications are detected. Ovarian cancer usually has reached its late stage when discovered. Symptoms of ovarian cancer vary according to the size of the cancer, time of occurrence, and whether there are complications or not. Then what are the symptoms of ovarian cancer? 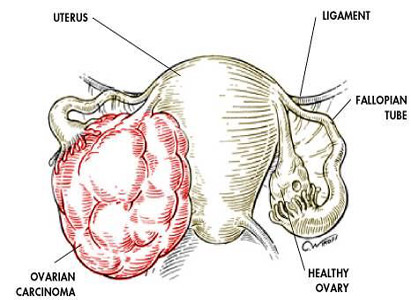 2. Abdominal distension: as the cancer grows fast, abdominal distension, lump and ascites may occur in a short time. Small tumors can only be detected in pelvic examination. As they become bigger gradually and reach out of the pelvic cavity, they will be palpable on the stomach.

3. Compression: When the tumor infiltrates the surrounding tissues or compresses the nerves, stomachache, waist pain or sciatica will be caused. When it compresses the pelvic vein, edema of the lower extremities will occur. Big tumor can compress the bladder causing frequent urination, difficult urination and urine retention. When it compresses the rectum, difficult defecation will be caused, while compressing to the gastrointestinal tract can cause symptoms of digestive problems and compressing to the diaphragm can cause difficult breathing and failure to lie flat.

4. Due to the fast growth of the tumor, innutrition and marasmus will occur and results in dyscrasia.

5. Related symptoms caused by cancer transfusion: Malignant ovarian cancer seldom causes pain. However, if the tumor cracks down, bleeds or is infected, or when it infiltrates and compresses the nearby organs, stomachache and waist pain will be caused.

6. If both the ovaries are damaged by cancer tissues, menstrual disorder and amenorrhea will be caused, while lung metastasis will cause cough, hemoptysis and hydrothorax and bone transfusion can cause local pain in the transferred lesion. Intestinal transfusion can cause blood in stools, more seriously, intestinal obstruction.

7. If it is functioning tumor, related symptoms of excessive estrogen or androgen will occur, such as early dysfunctional uterine bleeding, vaginal bleeding after menopause or masculine signs. Advanced ovarian cancer patients will have symptoms of obvious marasmus, severe anemia or other symptoms of cachexia. During gynecological examination, scattered solid nodules and lumps can be touched in both sides of the posterior fornix of vagina. They are solid, fixed, and rugged, usually accompanied with bloody ascites. Sometimes, swollen lymph nodes are palpable in groin, armpit, or supraclavicular.

3. Abdominal and low back pain: if adjacent tissues are infiltrated and adhered by ovarian cancer, it can easily cause vague and dull pain of low back and abdomen.

4. Abdominal distention and loss of appetite: if ovarian tumors oppress and pull surrounding ligaments, in addition to stimulation of ascites, similar symptoms of gastrointestinal disease will be caused.

5. Sex hormone disorders: when some tumors secrete excess estrogen, sexual precocity, menstrual disorders or postmenopausal vaginal bleeding can be caused; if it is testicular mother cells cancer, male characteristics will appear due to excessive androgens.

4. Dyscrasia: due to the rapid growth of tumor, malnutrition and physical emaciation can be developed, which results in formation of dyscrasia.