This is my third return visit to Modern Cancer Hospital Guangzhou. After putting down the luggage, I chat with the acquainted nurses and say hello to the wardmates from door to door. Yeah, I am an ovarian cancer patient from Jakarta. I have been fighting against cancer for three years, and I believe that I will finally win the war.

Be diagnosed with ovarian cancer

During May, 2011, I frequently felt distention in my abdomen, accompanied with occasional dull pain. I then went to a local hospital in Indonesia and underwent a series of examinations, including B-ultrasound. The doctor said it was ovarian cancer and suggested me have oophorectomy. But I refused and determinedly started on the journey fighting against cancer.

At first, my family found Chinese medicine treatment for me through all sources. During the treatment, abdominal distension and pain kept torturing me. In August, 2011, I felt my condition increasingly worsen and my lower abdomen kept bloating that I couldn’t even lie flat. I then went to the hospital in Indonesia again and had the abdominal ascites released, apart from which no anti-cancer treatment was performed. 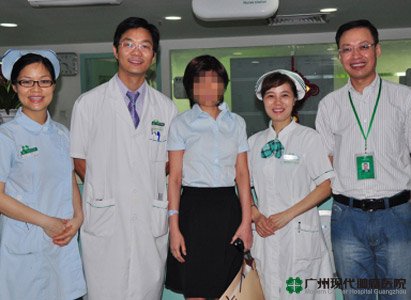 The first fight against ovarian cancer

In October, 2011, my family found in the internet the information about Modern Cancer Hospital Guangzhou. After a consultation in the Jakarta office of this hospital, I decided to go to China for treatment. It was then an unknown journey, and I didn’t know whether the cancer could be controlled, but I couldn’t just resign myself to death.

After admission in Modern Cancer Hospital Guangzhou, the nurses arranged a ward for me, chatted with me and introduced the environment and history of this hospital to me. They even introduced other cancer patients to me and encouraged us to fight against cancer together. Such deeds of them, which I had never encountered before, surprised and touched me a lot. Later, doctors who specialize in cancer and interpreters came to my ward and inquired about my condition and previous treatment, telling me that ovarian cancer is not horrible, only if I keep optimistic and actively cooperate with the treatment.

The next day, the nurses arranged comprehensive examinations for me, which found metastasis and severe ascites in my rectum, bladder, liver and diaphragma, accompanied with water in both chest cavities. After a joint consultation, the cancer specialists of Modern Cancer Hospital Guangzhou worked out a specific treatment plan for me. After their detailed explanation of my condition and treatment plan, I felt relieved and relaxed. I was then successively performed two interventional treatments, interposed with natural therapy, and later medicine infusion after releasing the ascites in my chest and abdomen. After the treatment, I felt my condition become better. My bloating abdomen gradually diminished and I was able to lie flat. I then decided to go home for restoration to regain my energy to go on fighting against ovarian cancer.

The second fight against ovarian cancer

In December, 2011, I came back to Modern Cancer Hospital Guangzhou for follow-up checking. Being warmly greeted by the hospital nurses, I was very surprised with their nice remembrance. I thought they might have forgotten me since there were so many coming and going patients and I was just one of them.

The CT scans result came out the next day, and I was told that the metastasis in rectum, bladder and liver had obviously become smaller than before, and the metastasis in the diaphragma had disappeared. The cancer specialists of Modern Cancer Hospital Guangzhou worked out another treatment plan for me according to my temporal condition. The doctors later performed to me another two interventional treatments and an interposed natural therapy. After the treatment, the nurses prepared for me nutritious daily meals, while the doctors and interpreters regularly went to my ward checking my conditions, chatting with me and encouraging me to fight against ovarian cancer.

For me, everyday in Modern Cancer Hospital Guangzhou is full. When staying with the doctors and nurses, I felt that we are friends. After discharging from the hospital, I went back to Indonesia and went on my life against ovarian cancer.

The third fight against ovarian cancer

In January, 2012, I pleasurably came to Modern Cancer Hospital Guangzhou with my family for the third follow-up checking. The CT scans showed that my rectum and bladder were affected by the ovarian cancer. Later, cancer specialists of Modern Cancer Hospital Guangzhou performed cytoreductive surgery to me, after which serous papillary cystadenocarcinoma were found in both my ovaries and transferred to abdominal cavity and pelvic cavity. Even so, I was not scared, as I had a solid believe that experts of Modern Cancer Hospital Guangzhou can help me fight against it. After the surgery, another two interventional treatments were performed to me. Thus, the cancer was controlled and I felt no discomfort from it. When I was lying on the sickbed and thinking about the discharging from the hospital a few days later, it occurred to me that I had done nothing to show my gratefulness to the doctors and nurses for their considerate caring and kindness. Then I shared my thinking with my family and the lung cancer patient in the next ward. We then decide to make a piece of embroidery together to show our gratitude to the doctors and nurses.

At the beginning, we were very slow and kept staring over again and again due to unfamiliarity with the production methods of embroidering and our determined desire to present the best work to the doctors and nurses. When discharging from the hospital, I passed my half-done embroidery to the lung cancer patient to have it finished.

Half a year later, in May, 2012, we finally finished the hand-made Chinese embroidery, on which it writes “Hua Kai Fu Gui”, meaning auspice. We presented it to the doctors and nurses of Modern Cancer Hospital Guangzhou and thanked them for their support, encouragement, care and treatments. Because of them, I was able to go farther and more steadily on the way fighting against ovarian cancer.

No chemotherapy, minimally invasive treatment helps me fight against cancer!*