It is unfortunate for this 56 years old lady, Mrs. Zhang Shaijuan to develop cervical cancer, the bigger female killer. Living a life of poverty and suffering from this severe disease, she isn’t obedient to the fate, but seeks for medical treatment instead. It is fortunate for her to get the medical aid offered by Modern Cancer Hospital Guangzhou. Through the Cancer Fund, she not only had her medical condition improved, but also reduced her economic burden.

Her fate plays a joke on her, uterus cyst developed to uterus cancer

This 56 year- old lady was born in a family with normal economic condition. After marriage, the couple supported their life as casual workers, though the life was poor, but they got love. Mrs. Zhang liked the songs of Teresa Teng very much. She was used to turn on DVD and listened to the lyric songs of Teresa Teng right after work each day. She also loved to sing the songs other than listen to them, because Mrs. Zhang was born with a nice voice. In order to make the life easier, this diligent woman even modified the size of clothes at night while she was singing the songs of Teresa Teng, accompanied by the sound of sewing machine. The days slipped away in the rhythm of sewing machine, as sweet as the songs.

However, the misfortunes fell on her one by one when she was immersing in her happy life. Two years ago, Mrs. Zhang was diagnosed uterus cysts and had taken surgery in local hospital in Indonesia. But this serious illness did not leave this strong woman away. Her doctor informed her that problem occurred in her uterus and was firmly diagnosed uterus cancer, and the cancer cells had spread to abdominal cavity, that would be a great sum of money for her treatment. With the test report on her hand, she was too shock to move a step. She felt like the sky was falling on her, the whole world lost the color and no more songs sung, even barely lost breath.

“Severe abdominal upset, after dinner is vomit, then have food gain. I tried to eat as much as possible, otherwise I would have no power to have chemotherapy and radiotherapy.” When recalling the days having treatment in Indonesia, Mrs. Zhang described that were the days neither she can live nor die.

Boundless medicine, the aid from another country

This poor family cannot afford the medical expenses after all those hard days in Indonesia. Mrs. Zhang only had 40,000 RMB for treatment that she had hesitated for long. Mrs. Zhang went to Jakarta office of Modern Cancer Hospital Guangzhou for consultation several times and her sincerity moved the staff in the office. In order to spread the humanitarianism of Boai, Modern Cancer Hospital Guangzhou stretched out the hand and decided to reduce some medical expenses about 30,000 RMB through Cancer Fund. 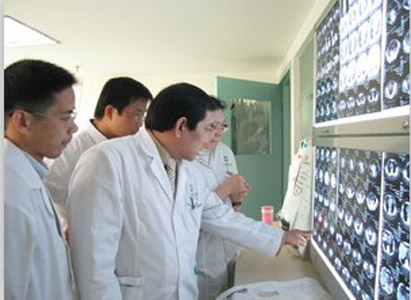 My painkiller, songs of Teresa Teng

Mrs. Zhang cannot walk because of the pain in sacroiliac and right leg on admission. Once her abdomen was pressed, unbearable pain was complained of. Occasionally fever occurred that she can only stay in bad. Doctors of Modern Cancer Hospital Guangzhou thought that, since the patient is adeno-squamous cancer of cervix after chemotherapy and radiotherapy with multiple lymph nodes metastases, minimally interventional therapy and 125 I particle implantation and traditional Chinese medicine as symptom supportive therapy was planned for her.

Since she did not know 125 I particles before, Mrs. Zhang got the question that would it be safe if this particles, which look like bullets were implanted inside my body. The doctor explained to her patiently that a 125 I particle is smaller than rice. It is an active nucleus of energy that can constantly radiate rays in short distance to kill cancer cells accurately. It reaches the same effect of surgery that it is also called particle knife. Most patients after the therapy won’t feel any difference because the complication is less when the side effects are mild that it doesn’t cause any severe organ dysfunction.

Mrs. Zhang easily took the minimally invasive therapy and particle implantation in succession. Total 90 particles were implanted in bilateral retroperitoneal lesions. Patient recovered well after operation, her fever disappeared and she felt her pain in body relieved too.

The songs of Teresa Teng echoed in Mrs. Zhang’s ward again. This positive lady also liked to take part in the communication meeting between doctors and patients to discuss the rehabilitation approaches. Many cancer patients found their confidence to fight cancer again with the encouragement from Mrs. Zhang. And everyone amiably calls her painkiller.

She replied with a smile on her face: “ On my way to fight cancer, the songs of Teresa is my painkiller. The God lead me to Modern Cancer Hospital Guangzhou. Thanks so much.”