In January, 2014, it was supposed to be hopeful and happy festival but he and his family went trough a long and unhappy period because he was diagnosed with nasophayrngeal cancer.

At first, he noticed some symptoms like dizziness, headache but he did not pay attention to it. Until the symptoms aggravate, he went to see a doctor with the company with family. However, his world turned upside down when he knew the result. He never thought that it would happen on him, fear and pain broke him down, but he cannot give up because his elder patients, young child and beloved wife and other relatives were supporting him. 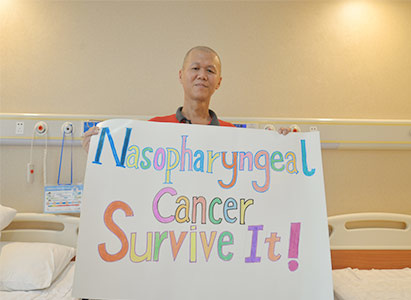 Under the suggestion of the local doctor, he took chemotherapy, radiotherapy and other medicines. His body is weaken day by day duo to the treatment. One day, a good news came to him that his condition was improved. He was very happy because he saved from cancer.

Wonderful time had gone so fast. He witnessed his son grew from 9 years old to 11 years but he faced a threaten again at this time. Cancer came back to him and it already spread to liver. Facing with this fact, he was desperate and hopeless. Chemotherapy and radiotherapy had made him suffered a lot and he did not want to go through it again or leave his family. Thus, he looked for other cancer options.

A surprising news was that his neighbor told him that St. Stamford Modern Cancer Hospital Guangzhou is a good cancer hospital. His neighbor is a 70 years old lady who was diagnosed with liver cancer and took treatment at St. Stamford Modern Cancer Hospital Guangzhou before. Her story inspired him so he went to Malaysia office for face-to-face consultation. After that, he decided to go to Guangzhou for treatment. 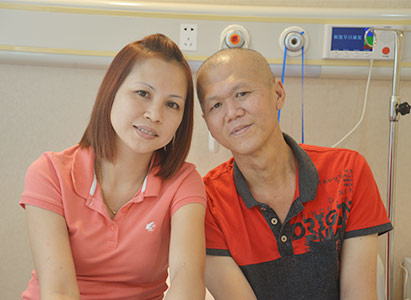 KOK KAH LEONG and his wife

April 18th is the reviewed check-up day for KOK KAH LEONG. The results showed that his tumor shrank by 60%, compared with the first time he took the check-up result. KOK KAH LEONG kept on taking interventional therapy three times. Now he can happily said that pain was not with me anymore. After a few session of treatments, he did not show any side effects.

KOK KAH LEONG said when he first went to this hospital, he felt very comfortable because every medical staff is passionate with smile which helps me remove the fear and feeling of strange. He said doctors and nurse from MCHG are responsible and kind. He took treatment here where he can see a hope of future, wishing to make a life happily.

<Previous Helped by minimally invasive treatment, a nasopharyngeal cancer patient has been surviving seven years*
Next> How Does Advanced Nasopharyngeal Cancer Patient Increase Weight from 39kg to 55kg in 3 Months?*