Surgery is Not the Only Way to Treat Ovarian Cancer*
<Previous NULL
Next> No chemotherapy, minimally invasive treatment helps me fight against cancer!* LANDRIANY, an Indonesian, is 50 years old this year (2016). She was diagnosed with ovarian cancer in 2014. She took surgery and chemotherapy which made her lose hair completely. The doctor in Indonesia asserted her condition was too serious to perform surgery. But she consoled herself with faith of Christianity, and held that “Although reality cannot be changed, everything will be better as long as I accept cancer and take treatment positively”.

Possibly because the God heard her devout prayer, her hair has been grown again. Now, LANDRIANY’s condition is under control effectively and in good condition, and doesn’t look like a cancer patient. In the face of camera, this brave anticancer warrior told us her anticancer experience calmly.

Surgery & Chemotherapy Made Her Suffering

LANDRIANY told us that there were signs for ovarian cancer. In 1998, she had found out abnormality of health. Every month, she got severely painful menstruation. It was too suffering to bear, so she got check-up and treatment in the local hospital, and she took one ovarian removal. Subsequently, her dysmenorrhea was alleviated and she became normal. She thought the sufferings ended, but it was just the beginning.

In 2014, she suffered from ovary bleeding with server pain, and was diagnosed with ovarian cancer stage II, 6 cm tumor in her ovary. She got surgery in local doctor, which removed the tumor effectively. However, in 2015, cancer came back to her with pelvic metastases. The local doctor gave up performing another surgery to her for her serious and dangerous condition. LANDRIANY and the medical workers

Whereafter came the woe. LANDRIANY took three courses of chemotherapy. However, her condition could not be controlled but became worse and worse, with tumor growth from 6cm to 11 cm. The symptoms of urinary and fecal discharge difficulty, body pains etc aggravated; her cancer stage became IV from II. Besides, the side effects of chemotherapy were obvious, including nausea, vomiting, hair loss etc.

By chance, LANDRIANY knew about Modern Cancer Hospital Guangzhou from newspaper and the Internet where introduction of minimally invasive therapy for ovarian cancer was shown. With advantages of no-surgery, small trauma, few side effects etc, minimally invasive therapy attracted her a lot. So she went to Surabaya office of Modern Cancer Hospital Guangzhou for consultation. 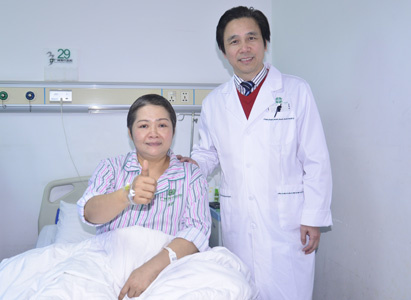 According to LANDRIANY’s attending doctor, interventional therapy treats tumor locally under the imaging equipment via millimetric incision on the skin, with advantages of small trauma, strong targeting, few side effects, good effect etc, which is more suitable for those patients who cannot be treated by surgery at middle and advanced stage like LANDRIANY. Combined with advanced naturopathy—microwave ablation that treats tumor with the highest inactivation rate currently, interventional therapy can make the maximally effect with few side effects.

LANDRIANY said, “During my first interventional therapy in the operating room, because it is topical anesthesia, I stayed awake and I did not feel any pain. It just needed half an hour. After the therapy, my tumor began to shrink. I have got improvement a lot and my hair has begun to grow gradually. These minimally invasive treatments cannot be found in Indonesian hospitals which have only surgery, chemotherapy and radiotherapy.” So far LANDRIANY has taken 5 courses of interventional therapy and 2 courses of microwave ablation. Her tumor has shrunk to 6 cm with stable condition. When she was asked for her wish after discharge, she said, “I want to get rid of cancer radically and return to normal life.” Optimism was a good medicine to treat pain. We believed that her wish would come true soon.

<Previous NULL
Next> No chemotherapy, minimally invasive treatment helps me fight against cancer!*