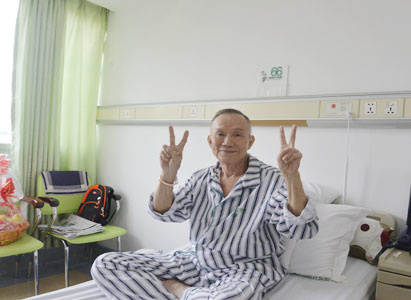 From Malaysia, at the age of 73 this year, YONG AH SANG had never thought that he would get cancer before with his healthy and strong body. Since December 2014, he started to become thinner and thinner gradually, but he had good appetite and mentality as normal without any discomforts. This made him and his families &friends confused. One day, during a trip to China, he suddenly found that he had a sense of being choked when he ate, and he had to end the trip and went back home at once. His children took him to hospital for checkup. He was told esophageal cancer by three doctors. Upon hearing that, he thought that it was a fate of joke at such an old age. However, he was so strong and optimistic that he accepted this fact without complaints.

The local doctors suggested him take surgery to remove the tumor. But his children did not agree with that. They did not want his father to suffer the pain of surgery because of his old age. And they found other treatments including traditional Chinese medicine and immune ozone therapy for him. So YONG AH SANG began to take Chinese medicine. After a month, his discomfort of swallowing was reduced, but its effect was very slow. Meanwhile, he got immune ozone therapy. The doctor suggested him take this therapy for 20 times, and said that after 4 times, it would work. However, the effect was also very slow. So he gave up after taking for 7 times.

When he came to Modern Cancer Hospital Guangzhou, he was examined by CT and diagnosed with cancer in the middle and lower section of esophagus. MDT (Multidisciplinary team) made a plan of interventional therapy and biological natural therapy for him according to his situation. He still remembered the day when he got interventional therapy. He said that it was making his body feel little bit hot when the drug was being injected into his body. After the therapy, he was not allowed to get out off the bed in 24 hours. As 24 hours passed, he could move and walk, and felt good. And then he had a fever which was gone after several days. At present, he has good appetite, sleeps well and can swallow normally. 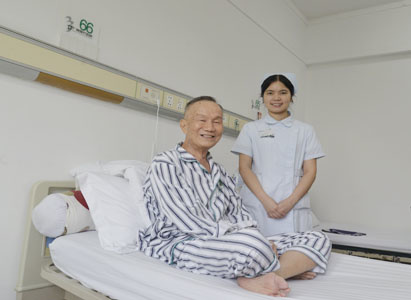 “Except for discomforts for several days after treatment, it is like vacationing at other times.” YONG AS SANG said. With positive attitude, he got up at 5 o’ clock every morning, and moved around in his ward. And then he went to the hanging garden on the fourth floor of the hospital for walking and having a fresh breath. He said, “The environment is very good here. The services here are different from Malaysian hospital. Here, all the nurses and doctors are so nice to me, providing very good services. I am confident about the following treatments because technology of Modern Cancer Hospital Guangzhou is NO.1 with rich experience in cancer treatment.”

At the end of the interview, YANG AH SANG shared many stories of his life to us. He specially thanked his filial children for encouraging and supporting him. He also said that his favorite was travelling, especially travelling in China. He hoped and said, “I want to defeat this disease as fast as I can, so that I can travel around the whole China, and go through every province of China.” We hoped that his wish could come true soon.