The Voice of Life*
<Previous Encouragement and Support Accompany in the Anticancer Road Always*
Next> Vietnamese Esophageal Cancer Patient: I Have Confidence in Minimally Invasive Treatment*

The hug of patient and doctor

When they heard a tap on the door, Dr. Tang Xiangzhuan walked into the ward with smile. Tran Thanh Tung, who was sitting on chair stood up at once and hugged Dr. Tang emotionally.

Through interpreters, Dr. Tang told the patient: “The tumor in his esophagus has gone according to CT scan. But we are not sure that if there are some cancer cells left. In order to cut down the recurrence rate, we suggest him to receive another two cycles of interventional therapies if agrees.”

“I would follow doctor’s instruction and suggestion. But what is the recurrence rate for me?” Actually Mr. Tran Thanh Tung was very happy to get this news. Since few months ago, there was a 5cm tumor in his esophagus and before he came here, he could not talk to others and have food normally. 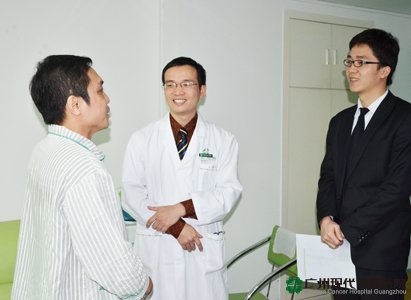 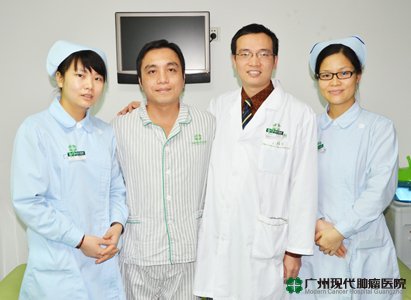 What was his medical history?

Mr. Tran Thanh Tung is 43 years old and an officer from the Department of Culture and Media in Vietnam. Before 2010, his life was so complete, has a happy family and successful career. But the peaceful life was smashed. He did not pay any attention when hoarse voice first attacked him and thought it was little problem. Local hospital informed him it was paralysis of voice cord and he took some oral antibiotic medicine. However the symptom did not improve that he turned to another hospital for general examination, by which he was diagnosed esophagus cancer. Later he had had herbal medicine for months, which did not control the disease but the symptom became more serious.

By the end of 2011, Mr. Tran Thanh Tung could not speak and felt difficulty in swallowing. As the disease progressed, he only took liquid food that his lost the weight of 11kg. He would not know how long he can stand this if a specialist in Vietnam Central Hospital of ENT did not suggest him to come to China for treatment.

Mr. Tran Thanh Tung came to Modern Cancer Hospital Guangzhou on Aug. 22, 2012. His tumor was so big to blocked his esophagus that endoscopy could not perform. How to solve this problem? An experienced doctor used a small tube to enlarge his esophagus slowly, and then a series of examinations including biopsy, CT scans, and so on were performed successfully. Mr. Tran Thanh Tung was diagnosed squamous cell carcinoma in middle and upper segment of esophagus with metastases to mediastinal lymph nodes. On his first admission from Sep. 1 to Oct. 15, 2012, he totally received 3 cycles of interventional therapy and multiple cycles of radiotherapy.

One month later on Nov. 25, 2012, Mr. Tran Thanh Tung and wife returned for follow-up and were told by Dr. Tang that Mr. Tran Thanh Tung recovered well and the 5 cm tumor on first admission had disappeared. When Dr. Tang asked about his daily life, the wife said: “he can have food gradually one week after discharge, the first was porridge, then was thick porridge, noodles and finally was rice.” She smiled happily when talking his improvement. “Before, even water can chock him and he had only pasty food. Now he sleeps well and gains back his weight as before.”

“Can he work after normally after discharge on Oct. 15?”

“Sure, before we returned to hospital, he was working. He now can talk to others, but he could use pens in the past”

“Many esophagus patients in middle or late stage got effective treatment in Modern Cancer Hospital Guangzhou. So don’t worry, we will try our best to cut down the recurrence rate of Mr. Tran Thanh Tung.” Dr. Tang told the couple. 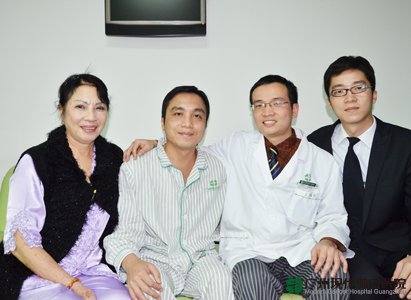 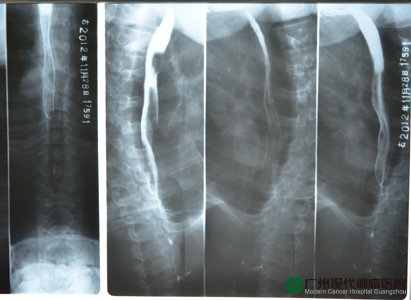 “This is the comparison of CT scan on first admission and in follow-up, the CT scan on Nov. 28 shows that the 5cm tumor has disappeared.” Dr. Tang explained.

In hospitalization, the most interesting thing to Mr. Tran Thanh Tung was that he can talk and eat normally, though his voice was a little bit hoarse. Additionally, he also enjoyed the activities arranged by hospital, like visits in Memorial Menorial Park and Sun Yat-sen's Memorial Hall, night cruise of Zhujiang River and so on. The most impressive sight spot to Mr. Tran Thanh Tung was Canton Tower. He has been to many countries, but he thought Canton Tower is the most beautiful in the world.

<Previous Encouragement and Support Accompany in the Anticancer Road Always*
Next> Vietnamese Esophageal Cancer Patient: I Have Confidence in Minimally Invasive Treatment*