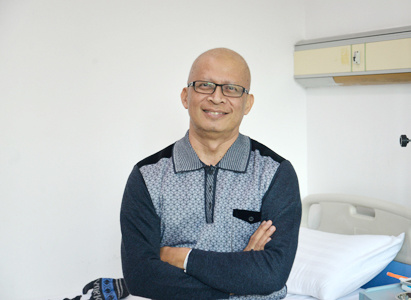 ElANG MOCHAMAD, 53 years old, he used to have a happy life with stable job, virtuous wife and filial sons and daughter. However, a sudden bad news broke his happiness. A tumor was detected in his lung during the annual physical checkup. Further examination showed that the tumor is malignant. In other words, ELANG got lung cancer.

ELANG was very depressed and confused when he knew he got cancer. Actually, this bad news scared both ELANG and his colleagues, because ELANG loves exercises, he goes to work by bicycle or foot, and do exercises regularly every weekend. Why ELANG got lung cancer with such a healthy life style? ELANG was confused and did not know how to treat it. Since the tumor is not big, doctors in Indonesia suggested him to take resection operation, but ELANG refused. He convinced that human body is an integrated entity, only with an integrated body, can human be healthy. Once he takes resection operation, his body will no longer be integrated, not to mention keep healthy.

ELANG and his attending doctor

After hospitalization, ELANG took cryotherapy and biopsy, results showed that he got stage Ⅱ lung cancer, with metastasis to the lymph node. Based on his condition, the multidisciplinary team (MDT) of Modern Cancer Hospital Guangzhou specially made him a therapeutic plan. In the first stage, ELANG was given interventional therapy, cryotherapy and natural therapy. To ELANG’s surprise, his tumor marker has reduced to 1.8 after taking the first session treatment. After receiving the second session of treatment, his tumor marker reduced to 0.7. What delighted him most is that the cancer cells metalized to his lymph node gone. In order to prevent deterioration and metastasis, ELANG took interventional therapy and cryotherapy again.

When asking his feeling about the first time he took minimally invasive therapies, ELANG told us that he did not scared or nervous at all, because doctor already explained to him the procedure in detail. ELANG was well prepared and he fully trusted Modern Cancer Hospital Guangzhou. He believed that Modern Cancer Hospital Guangzhou would give him the best treatment and he would restore to health. ELANG and his wife

<Previous Microwave Ablation Kills the Lung Tumor by Heat*
Next> Interventional Therapy and Cryotherapy, Ignite the Light of Hope for Lung Cancer Patient*