The morning of the day when Hugo was about to share this story, he took the treatment doctor arranged for him as usual. After a light lunch, he had an online chat with his daughter who is far away in the Philippines, telling her about our interview in the afternoon. “After the first session of treatment, my daughter and I have reached an agreement that we hope to share my treatment story with our friends at home through newspaper or TV. Anyway, I want to tell them what an amazing treatment process it is and how lucky I am to go through such a process”, said Hugo. 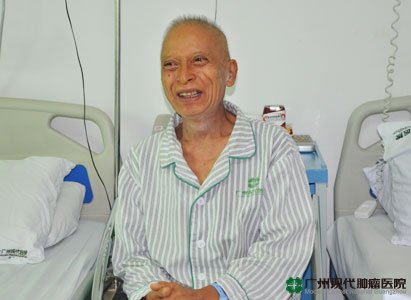 The sudden painfulness falling on him in June, 2012 is still vivid in his mind now. “The primary symptom was stuffy nose. When it became severe, I felt difficulty in breathing. My right nose often bled with no reason. Then I realized it is not a good sign”, said Hugo. “I noticed that my father-in-law’s hearing decreased. Even we talked loudly, he could not hear us clearly starting from July”, said his daughter-in-law, who stays with him and takes care of him, “his condition got worse and easily got fever, caught cold or sore throat. He had difficulty in swallowing, as a result lost totally 8kg in a few months and became very thin. ”

After a process of anti-inflammation treatment, Hugo’s condition was not improved at all. What was worse, he found there were many masses in various sizes in his nose, back of right ear, pharyngeal lymph nodes and soft palate area. With his more than 20 years’ medical experience, he instinctively thought that these masses are the cause. “Cancer”, the frightening word, emerged to his mind. With the company of his son and daughter, he went to the largest local hospital for examination and was told with the crucial and frightening diagnosis result----stage 4 nasopharyngeal cancer with soft palate invasion and metastasis in the neck lymph nodes.

“I was very scared. Although I myself am a doctor, I still felt very disappointed and scared”, Hugo said thinking of the last summer.

“The treatment plan we designed for Hugo is interventional therapy as main therapy, combined with natural therapy and radiotherapy. The treatment duration is a little long. Considering the patient’s age and body condition, we made sure that drugs in every session are controlled in dose patient can tolerate and does not cause discomfort”, said his attending doctor, Chief surgeon Peng Xiaochi.

“Interventional therapy is to give anti-cancer drugs to the cancer tissues directly through artery. I undergone two sessions of interventional therapy, but did not feel any discomfort. It is really amazing”, Hugo introduced, as he has been very familiar with the therapies he underwent.

After interventional therapy, Hugo’s clinical symptoms have been obviously improved. The tumor as large as a kid’s fist before treatment has shrunk to about 1 cm now. The hearing of his right ear also has come back. He used to have difficulty in breathing and swallowing due to soft palate invasion and lymph node metastasis before treatment, but now has become normal.